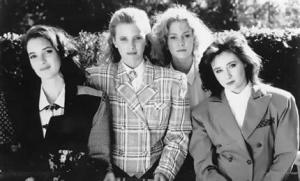 In this piece in my series on female friendships I want to talk about a very particular type of friend that many of us have had – she can make us feel like we are part of a very elite group but without warning she can flip a switch and ice us out completely.  Her name is Heather.

I learned about this type of friend when, as a preteen, I was obsessed with the movie Heathers starring Winona Ryder (before she was a shoplifter) and Christian Slater (when he was actually cool).  I watched Heathers so many times that my then-best-friend and I had memorized one of the bitchy fight scenes between ‘Veronica’ (Ryder) and one of the Heathers, which we would randomly act out while in public.  If you haven’t seen this movie you should probably stop reading and go watch it immediately.  But if you don’t have time for that let me give you a quick synopsis.  The film centers around a very popular group of girls who are all named Heather (with the exception of Veronica).  Needless to say, the Heathers were awful awful people – obsessed with looks and popularity and (spoiler alert) ultimately punished by deadly revenge enacted by Veronica & J.D. (played by Slater in a not-so-subtle reference to Salinger’s Catcher in the Rye).  Of course, this movie – and it’s final climatic scene of outsider revenge came out decades before Columbine or any of the other school shootings that made the sexy outsider far less appealing.  But that’s not the point – the point of that film for me was really about the damage that friends can inflict on one another.

Later we would see similar stories of female friendships blow up and play out in movies like Mean Girls or in episodes of Sex And The City (which, contrary to popular opinion, did not coin the term ‘frenemy’, though it may be credited with its popularity in our modern vernacular).  But back in the 90s we just had Heathers, and their special brand of ‘friendship’ – one that is far more common in females (though not exclusive to them) and one that I would also like to say is more common in high school, though my experience as a woman in her thirties has taught me differently.  If you need more evidence of adult Heathers, and you happen to live in L.A., you can check out Alice Johnson Boher’s one-woman show “How to Break a Bitch & Other Lessons In Female Friendship”.

I’ll wager that many of us have known Heathers – the female friends that smile to our faces and then talk mad shit behind our backs.  Heathers are everywhere, and they are a big problem.  Yet more problematic is when they turn and enact a verb: Heathering – when one Alpha Heather in a group of friends ups the ante by not only shit talking about a targeted ‘friend’ but also using her power to get the other group members to end their friendships with the target.  Now, I don’t think I have to tell you this but usually Heathering is about jealousy.  In high school it was jealousy about a prom date, a good grade on a paper, or even over said target shopping exclusively at Benetton (what.a.bitch!).  Unfortunately, these Heathers graduate from high school, and bring their special brand of jealousy into adult life.

Now, under normal circumstances one would imagine that our friends would be happy for us in these situations, but many of us have experienced the opposite.  Our successes make our friends jealous and they can lash out – talking behind our backs about why we didn’t deserve that marriage proposal, job promotion, academic grant, or other professional successes.  And it’s not just frenemies that do it.  Sometimes it’s your best friend in the world – your ‘ride or die’ (as my young friends coin their besties).  A good friend of mine told me recently some sage advice that she said I wouldn’t like to hear: “no one wants to see you happier than they are”.  After a lifetime of interacting with Heathers, I think she might be right.

Now, I haven’t seen this dynamic play out in male friendships, but I know better than to make sweeping generalizations.  What I do know, however, is that many women in our culture are taught to compete with one another from a young age.  Is there competition among boys?  Absolutely.  But somehow that seems to play out differently.  And perhaps it is because for generations boys have been taught to channel aggression and competition into their athletic pursuits (something that was offered much later to our young women and girls).   Indeed many scholars have written about how sports can help men channel that competition into healthier venues (though of course there is also a critique of sports and the culture of aggression and violence it engenders (no pun intended) as well).  So whether it’s about sports or not, there is something different about how boys and girls are socialized around issues of friendship and competition – something we can recognize even if we can’t name.  It’s the reason why Heathers or Mean Girls don’t really have male equivalents.

It’s also the reason why the following happened on a recent episode of Go On.  On that (hilarious) show, radio sportscaster Ryan (Matthew Perry) and his producer Steven are talking to Ryan’s assistant Carrie about her beautiful friend that Ryan would like to date. Carrie says a few negative things about said friend, to which Steven meows (because any critique of a woman by another woman in our culture is automatically dismissed as cattiness).  And then this happens:

Carrie: “I am not being catty, it’s just…complicated to be her friend, okay?  She wins at everything and sometimes I don’t like myself when I’m around her.”

Ryan: “Yeah, I totally get that.  Steven, you know our friend that we hate because he makes us feel bad about ourselves?”

Ryan: “Right, guys don’t do that because it’s deranged.”

Guys might in fact do that, but in my experience at least, they don’t do it nearly as often as women do.  And not because women are deranged and men aren’t, but because jealousy isn’t the same in male friendships as in female ones.  I can’t explain it, but I can say – from first hand experience – that it is toxic.  So in the interest of weeding out toxic friendships here’s a handy guide to figuring out if your friend is a Heather:

*She comes to the rescue when you are having a hard time (going through a breakup, losing your job, etc.) but disappears when things are going really well for you.  This is clue number one.

*Clue number two: she has Heathered other people out of a friend group before.  In the otherwise unimpressive movie Side Effects, a character said a line that I haven’t been able to shake from my consciousness (and so you’ll probably see it repeated in future posts): “The best predictor of future behavior is past behavior”.

*And finally, your friend is a Heather if she regularly talks shit about her other friends (note that this is the biggest clue).  Furthermore, if your friend is talking about someone else to you then you can put money on the fact that she is talking about you to someone else.  Now, we all talk about our friends – so what is important is to fetter out those folks who talk about others in malicious ways designed to get you to agree with their own negative assessment of these people (as opposed to just sharing information among friends in a positive way, like, ‘Oh my god, did you hear that Ann is engaged?  Isn’t that awesome?’ or ‘I’m so happy that Margie got that grant for her research – she really worked hard on her application’).

So, if you find that your friend is a Heather here’s what you should do: back away, and find some new friends.  Sorry – I wish I could tell you there was another way, but there really isn’t.  And be aware that as you distance yourself from your Heather you will inevitably get Heathered by this individual (and anyone she has under her thumb).  That’s ok.  Know that it isn’t about you, and that by eliminating these people from your life you can make room for more positive influences, and friends who are truly happy for your successes.

[Next up in the series is one more bummer post about a certain type of friend you’ll want to avoid, but after that I promise to post a thing or two about how to create and maintain positive friendships.  In the meantime, if you have a story about your own Heather, or a request for a topic about friendship you’d like to see covered here, post it in the comments below.  Thanks for reading, and happy friend making!]