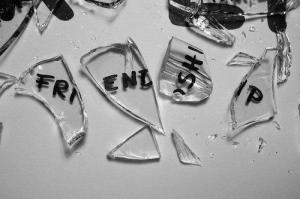 Prior to working on this series on female friendships I believed, wrongly as it turns out, that the end of friendship is something we don’t often discuss.  But even a cursory Amazon search will yield a host of books about this very topic  – and often, specifically about women’s friendships.  You can check out famous female authors writing about this in The Friend Who Got Away: Twenty Women’s True Life Tales of Friendships that Blew Up, Burned Out or Faded Away – or a clinical psychologist’s advice on this issue in Best Friends Forever: Surviving a Breakup With Your Best Friend.  But since friendships, like romantic relationships are complicated, not all friendships end in the same way.  In particular what I want to talk about today is something that is often taboo for us to discuss but is also – unfortunately – a very common experience.  It’s what I call the ‘Sudden Death’ friend – the person who cuts you out of their life completely, unexpectedly, and without explanation.  Maybe this quote from Liz Pryor’s book What Did I Do Wrong? What To Do When You Don’t Know Why The Friendship Is Over, will sound familiar:

“It happens without warning, and it devastates you: Your closest girlfriend cuts you off completely. No more late-night phone calls and emails, no more catch-up lunches and dinners. She has decided for whatever reason to move on with her life and has left you to try to make sense of what happened. The experience can be as painful as the death of a loved one and as confusing as an unexpected breakup with a significant other.”

I have – for better or for worse – had more than one very close friendship end in this manner.  And it is heartbreaking.  It’s taken a lot of time to get over them.  I’m still getting over them.  But I’ve also started to see a pattern in these friendships – one that I’m hoping will help me avoid such a tragic scenario in the future – or at least, to get over it with less anguish if it happens again.  Because – as I have learned – friendships that end in this way are not about me – they are about the other person.  Now, this does not mean that I am either ‘innocent’ or a ‘victim’ – as a relationship of any kind takes two people.  However, the decision to cut someone out of your life with no explanation at all  – that takes only one person.  And that’s what sucks about it so much.  When we get dumped (by friends or romantic partners) if we can talk to the person and try to see where they are coming from and why the relationship needs to end for them – well, it can help us process it much better.  In the sudden death breakup the person who did not make the choice to end the friendship is robbed of a very basic human need: understanding.

But here’s the thing – understanding the type of people that end friendships without warning and without explanation can help you heal your way through these breakups.  Because in my experience sudden deathers have two basic things in common: first and foremost, in general these people have cut off – or Heathered – other close friends in the past.  And secondly, these sudden deathers often have difficulty addressing conflict in relationships.  Because we are human beings first and foremost, conflict is inevitable and knowing how to deal with conflict is potentially the most important tool for crafting healthy friendships (it is also the topic of my next post in this series).  So if you learn that a friend has a history of Heathering and seems particularly uncomfortable with/unable to address conflict or interpersonal issues with other people…tread carefully.  As I quoted in my last post (and am likely to repeat over and over): “The best predictor of future behavior is past behavior”.  Sorry.

Just as it is important to suss out the type of friends who are apt to be sudden deathers – and distance yourself accordingly – it is also a good idea to understand how to react and process the situation if you find yourself suddenly and inexplicably cut off from a once-close friend.  If that happens to you, and I hope that it doesn’t, what follows is my advice on how to navigate these shark-infested waters.

Now somebody once said that you can’t please all of the people all of the time, but you can please some of the people some of the time.  But what I have learned – the hard way it seems – is that there are some people you can’t please any of the time.  No matter how hard you try.  No matter if you forgive and forget and try to embrace them with love.  “But I didn’t do anything wrong” – it’s a line I am known to say in certain moments – a plea in situations where I want the outcome to be different.  But what I’m realizing is that sometimes – even when you don’t in fact do anything wrong – there will be people who will still find a way to be angry at you, to not like what ever it is you did – even if you did nothing at all – and cut you out of their lives entirely.  And with those people, there is nothing you can do to change that.  Repeat: there’s nothing you can do to change that.  (Sorry again).

Most of us are familiar with that old Alcoholics Anonymous prayer which asks for the “serenity to accept the things I cannot change, the courage to change the things I can, and the wisdom to know the difference.”  Of all three parts I think it’s the last one – the wisdom to know the difference – that is most crucial thing.  It is also the hardest.  And for some of us, it’s even harder than hard.  Those of us that – by intention, by design, or by happenstance and history – find ourselves wanting to ‘save’ other people (even when it costs us our selves) may have the hardest time of all with this.  And when I say people who want to save others I don’t just mean doctors and firefighters –I also mean activists and teachers and social workers and community builders – all those well-intentioned people who see a broken system and want to fix it, who want to give people who might not otherwise have had it a chance to succeed in the world.  As a vocation, this is noble.  In personal relationships it can be devastating.

We all know what I mean, and I would wager we’ve all known someone like this in our past (or our present) – someone who we thought was so amazing and brilliant and perfect if only they would “X, Y or Z”.  And it really doesn’t matter what the XYZ is – sometimes it’s drinking too much, sometimes it’s lying, sometimes it’s just laying around/not living up to their potential, sometimes it’s a physical issue, other times it’s using certain words or volume and tone of speaking, or just taking things personally, or getting defensive.  But whatever it is – I’m here today to tell you that it doesn’t matter: YOU CANNOT MAKE SOMEONE STOP DOING X, Y OR Z….BUT YOU CAN SPEND A LOT OF TIME AND A TON OF EMOTIONAL ENERGY TRYING.  And if you do, here are the two things I can promise you: 1) it won’t work and 2) you will never get that time or energy back.  And this next one isn’t a promise but it’s damn likely: that person you were trying to change will probably end up resenting you for it – and you will probably end up resenting them too.  This includes people who are wont to end friendships suddenly and without explanation.  You can leave these folks a million teary voice mails, you can stalk them, ask mutual friends why they defriended you on Facebook, and I can almost money-back guarantee you that it won’t work, they won’t respond, and you will not come any closer to understanding why they walked away.

So if you are on the receiving end of a sudden death friendship here’s the best I can tell you: It will hurt – let it hurt.  Grieve the relationship – don’t let the person who walked away rob you of that.  But grieve it on your own.  Don’t go after that person, send them countless emails or leave messages begging them to just explain what happened – because it won’t bring you any closure.  As Wiz Khalifa said, “I don’t chase after anyone, If you wanna walk out of my life, then I’ll hold the fucking door open for you.”

Maybe it sounds harsh, but in the end you can give yourself the closure you need (that all healthy people desire) by realizing you are – or you will be – better off without that person in your life.  Even if it hurts.  Actually, because it hurts.  Since that hurting lets you know that you really cared about that person, and you are operating within the bounds of normal and healthy ways of connecting with others.  And as you go forward that door someone walked out on you through will be the same door a new friend – one who can love and care right back at you with the same devotion and generosity and kindness that you give to others – will walk into your life through.  So stay open to that – and as friends come and go through that doorway, and no matter how badly you may want to – don’t ever turn the lock.