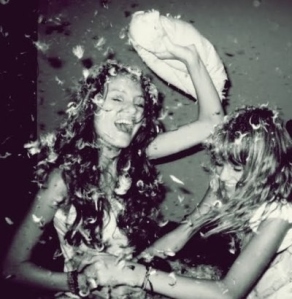 remember when you had fun with your friends?

Ok, dear readers, so ideally now that you’ve crossed those Heathers and Sudden Deathers off of your friendship list, I want to end this series with a post on two special kinds of friends – the Long Hauler and the Chap-et Friend – and some advice on making these friendships last.

*Your Chap-et friends:  Right off the bat I have to say that this is a term I’m borrowing from someone I once knew who referred to telling the ‘Chap-et version of stories’.   As she explained it to me some 15 years ago (so I’m paraphrasing here): there is the normal retelling of a story like, “I went on a blind date last night” and then there is what she called the ‘Chap-et’ version, where no detail is spared: “so I had this blind date last night and when I was on my way to meet him, and I was running five minutes late, but I had really chapped lips, I stopped into the convenience store to buy some Chapstick, but they didn’t have any, so I ended up buying Chap-et, I got the cherry flavored one…” and the story continues on with the same level of minutiae. Clearly, the Chap-et version of a story is saved for one’s closest friends, the ones who actually want to hear every last detail of your experience.  To this day my friends will still use this term in response to me giving a Readers Digest-esque synopsis of a story, like, ‘okay, Kaila, I’m going to need the Chap-et version of this’.  So I’ve borrowed from this old acquaintance to name the friends who get the Chap-et version of your life stories your ‘Chap-et Friends’.  These are rare specimens.  If you have even one Chap-et friend in your life you are very, very lucky – treasure these folks.

*Your Long Haulers: Friendships, like any relationship, ebb and flow over time, space, distance and life changes.  A ‘long haul’ friendship is able to endure these fluctuations – without assigning blame and without severing the friendship altogether.  I am lucky enough to have a few of these friendships – women who have been important friends in my past who are now in a different place than I am (be it actual geographic location or simply our positions in life).  These are the women I might not get a chance to see in person – or even talk on the phone with – for months, maybe even years, but I know that when we do manage to connect there will be no hard feelings, no accusatory ‘where have you been’, instead just a genuine gladness to reconnect and fill each other in on the twists and turns of our lives in the period since we have spoken last.  These are friends that are no longer in my life on a daily basis, but they are friendships that I cherish, that have sustained me in different parts of my life, women whom I respect and adore, and who somehow have managed to stay in my life – even peripherally – for the long haul.

In my experience, both the Chap-et and the Long Hauler friendships tend to have something important in common: they can survive conflict.  As I said in my last post, conflict is inevitable – in any kind of relationship. Be it a disagreement over politics, jealousy over personal choices, or just a hiccup in communication – you will face conflict in your friendships.  But that doesn’t mean that the friendship has to end.  It also doesn’t mean that you and your friend have to ‘process’ each and every disagreement you come to (because that is just exhausting).  In fact, there is a simple two-step practice that can get you – and your friend – through any conflict. First, determine how much space this conflict is going to take up (yes, it is a conscious decision) and then secondly, open a dialogue.  In the world of self-help these steps are easy, but IRL it can be really difficult.  Still, it’s worth it.  Allow me to explain.

Let’s say that a conflict arises because we hear that a friend of ours is talking shit about us.  If we are like most humans, we will have a visceral emotional and physical reaction to this information.  We might be angry, we might be hurt, but either way we are often thrown into an immediate ‘fight or flight’ situation.  The second option – flight – is what leads some folks to choose to end the friendship.  If we choose the first option – fight – we put up our dukes, get righteously defensive and, with the help of some instant gratification technology, we text/call/email/Facebook/Tweet-at our so-called friend with the intention of confronting her.  Neither of these responses is ideal (though at least with the fight model the potential of dialogue is present – a potential that is completely shut down once we go into flight mode).  If you want your friendships to endure, my suggestion is that when conflict arises you should aim to land somewhere in between ‘fight or flight’.  To wit:

Because – let’s face it – we all have the ability to get really sensitive, take things personally, blow things out of proportion, and act like giant douchebags (yes, I’m talking about you, not just your friends).  But if we can catch ourselves in these instances we can prevent our ‘in-the-heat-of-the-moment’ selves from doing something stupid, like trashing a good friendship.  And if we use the two-step process described above in order to clear the air with friends in a rational and calm way then we can avoid the build-up of weirdness – like, say, when we hide next to our beds eating Cool Whip rather than face the friend who has come to check in on us even though we haven’t been on the best terms lately (ahem, Hannah & Marnie).

So relax a little, give your besties the benefit of the doubt (as you will inevitably need them to do the same for you sometimes), talk about it so you don’t find yourself knee-deep in the un-said, but don’t over-talk it so that you can still have FUN together and not just process all the freakin time.  In other words, dear readers: Keep Calm & Friend On.